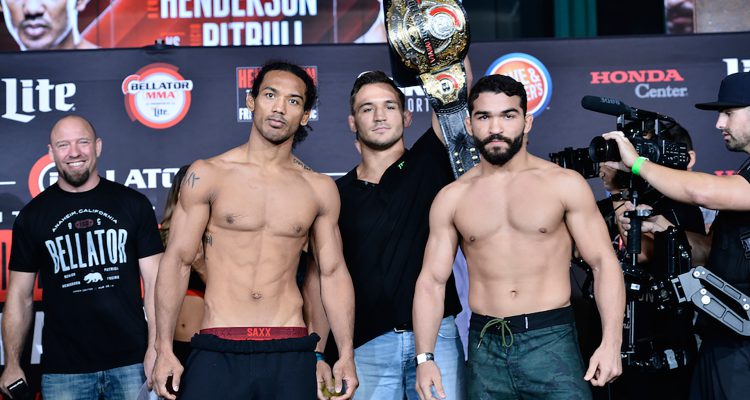 The official weigh-ins for “Bellator 160: Henderson vs. Pitbull” took place this afternoon in front of a loud and excited crowd just outside of the Honda Center in Anaheim. The competitors are ready for action tomorrow at the Honda Center, with the event airing LIVE and FREE on SPIKE at 10 p.m. ET/9 p.m. CT.

The main card is highlighted by a lightweight main event between fellow superstars Benson Henderson (23-6) and Patricio “Pitfall” Freire (25-3), where a future title shot will be on the line. In addition, undefeated knockout artist A.J. McKee (4-0) clashes with late-replacement Cody Walker (7-4) and explosive lightweights Saad Awad (19-7) and Derek Anderson (13-2) go toe-to-toe in a matchup that you do not want to miss. Lastly, Bubba Jenkins (11-2) will look for revenge against Georgi “Insane” Karakhanyan (24-6-1) in a featherweight rematch.

Also, during the card’s prelims, you won’t want to miss as Joey Davis makes his Bellator MMA debut, and Lyoto Machida’s brother Chinzo Machida makes his promotional debut as well.

“Bellator 160: Henderson vs. Pitbull” takes place on August 26 inside Anaheim’s Honda Center, and will air LIVE and FREE on SPIKE at 10 p.m. ET/9 p.m. CT., while preliminary bouts will stream live on Bellator.com and The Bellator Mobile App beginning at 5:00 p.m. PT.

No Comments on "Bellator 160: Henderson vs. Pitbull Weigh-ins + Staredowns (photos)"