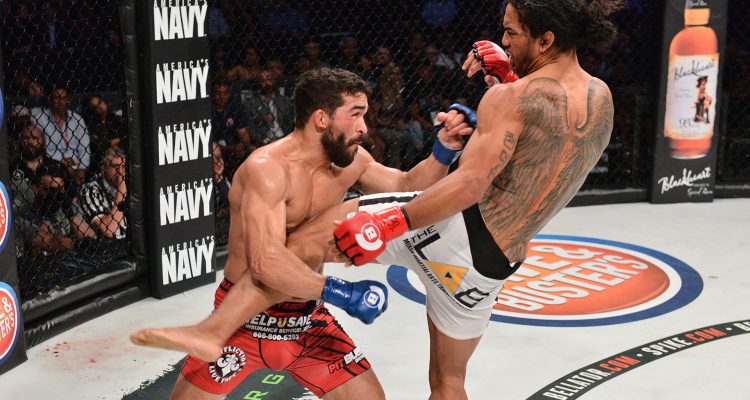 Benson Henderson Earns Lightweight Title Shot Following Injury To Foot Of Patricio “Pitbull”
Benson Henderson (24-6) earned his first victory since joining the Bellator MMA fray at Honda Center in Anaheim, Calif., Friday night. A faulty kick by Patricio “Pitbull” Freire (25-4) led to a leg injury, forcing him to forfeit the loss two minutes and 26 seconds into the second round.

After making the jump up to Bellator MMA’s 170-pound division, Henderson returned to where he was dominant in the UFC as a lightweight. After the win, Henderson received word of his next opponent; Bellator MMA’s current Lightweight Champion, Michael Chandler. The two are scheduled to tangle November 19 in the main event of the recently announced “Bellator MMA in San Jose.”

“Fight of the Year” Candidate Ends in Unanimous Decision Victory for Anderson
It took all three rounds to determine a winner in the evening’s co-main event, but in the end, Derek Anderson (14-2) emerged victorious with a unanimous decision (30-27, 29-28 twice) win over Saad Awad (19-8). “The Barbaric” continues his recent trend of extending fights through the final round, as the win marks his third consecutive fight to go to the judges’ scorecards. The San Diego native has now recorded five wins under the direction of the Scott Coker-led promotion, including multiple victories over fellow lightweight Patricky “Pitbull” Freire, earning himself well-deserved respect among the division’s elite.

Karakhanyan’s “Insane” Knockout Puts Early end to Jenkins’ Night
Georgi Karakhanyan (25-6-1) needed only 53 seconds to finish Bubba Jenkins (11-3), as the Russian featherweight took care of “The Highlight Kid” for the second time in two years. “Insane” came out firing, landing multiple blows that sent Jenkins to the mat with an early knockout, earning his 11th win in his last 14 fights. The loss is only the third of Jenkins’ young career and second of the first round variety, both of which Karakhanyan is now responsible for. The win is the fifth knockout of Karakhanyan’s career and is his third in the opening frame.

McKee Remains Undefeated With Impressive Guillotine Finish
In the opening contest at “Bellator 160: Henderson vs. Pitbull,” A.J. “Mercenary” McKee (5-0) remained unbeaten with a guillotine choke submission 32 seconds into the second round. By extending the fight past the opening frame, Walker was able to do what no other opponent has done, as each of McKee’s previous four wins had resulted in a first round finish. The win capped off an impressive night by Team Bodyshop, as McKee’s teammates Joey Davis (1-0) and Gabriel Green (4-0) also had their arms raised in the preliminary portion of the event. As one of Bellator MMA’s top young talents, the 21-year-old McKee was able to prove once again that he belongs among the division’s elite. After the fight, the Long Beach native called out Patricio “Pitbull,” saying “It’s nothing personal, I want (Daniel) Straus.”

No Comments on "Bellator 160: Henderson vs Pitbull (photos)"