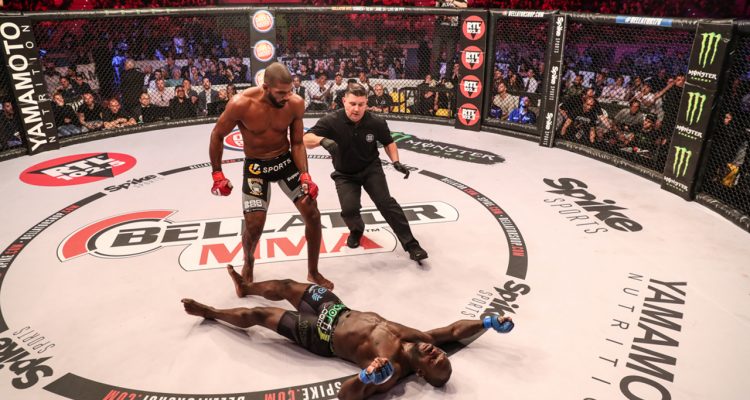 => VIEW THE PHOTO ALBUM (97 photos)
On Saturday, April 8, Bellator 176 and Bellator Kickboxing 5 took place inside The Pala Alpitour arena in Torino, Italy. In the Bellator 176 main event, Middleweight Champion Rafael Carvalho successfully defended his title, knocking out Melvin Manhoef with a head kick in the 4th round.  In the Bellator Kickboxing 5 Women’s Flyweight World Title Bout, Champ Denise Kielholtz retained her title, defeating Martine Michieletto via unanimous decision.  Afterwards Kielholtz told everyone she hopes to be fighting MMA by the end of summer.

Quote from Rafael Carvalho: “The last fight didn’t go as I expected or like the public expected,” Carvalho said. “This fight I knew that there needed to be an undisputed winner with a finish and I’m very glad that I was the one who came away with the victory. I’m going to continue to defend my middleweight title here at Bellator, but I’m also interested in a super fight in our light heavyweight division or maybe a bout in Bellator Kickboxing. That would be fun for me.”

Quote from Anastasia Yankova: “I feel okay after this fight. My face looks much better right now than it did after my last fight,” Yankova said “It wasn’t perfect but I’m improving every day and I’ll continue to train hard with Mike [Swick] at AKA Thailand. I am working to get my weight down to 125 lbs. where I want to soon be Bellator’s champion.”

Quote from Valeriu Mircea: “I’m very proud of my performance out there. It was part of my game plan to remain calm and patient throughout the fight and I am happy to have gotten the positive result,” Mircea said. “I am coming off of a frustrating knee injury that left me with only a month and a half to prepare. Victory is sweet and I am happy that my sacrifices have provided a good result.”

Quote from Mihail Nica: “I am feeling very positive and happy that my hard work has paid off,” Nica said. “I look forward to getting back in the gym tomorrow to better my skills. I want to continue my undefeated career here at Bellator, maybe soon in America. I think it would be great to fight there because of the level of popularity out there. I want to be a hero for the Italian fans to cheer for and grow the passion for MMA in this country.”

Giorgio Petrosyan Quote: “I’ve spent a lot of time studying this opponent and I felt like I knew his fighting style well so I was able to put together a solid game plan and execute it successfully,” Petrosyan said. “Now I’m looking forward to getting some rest, and we will let Scott Coker and Carlo DiBlasi decide what is next for me.” 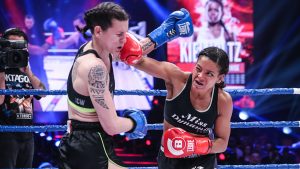 Denise Kielholtz Quote: “It was a good night for me with the win, but it was tough fight. She’s a taller southpaw fighter and she really brought it. All rounds were for me and that’s the most important thing for me. It’s great to retain this belt, this is my biggest prize in the sport and I’m honored to be the world champion for Bellator,” Kielholtz said. “Really, for me, Bellator is the biggest kickboxing organization in the world, they are really for the fighters, so I am very happy to be representing this company. The next time you see me out there might be in the Bellator cage fighting MMA. We’re working very hard on all aspects of my training and so hopefully before the end of summer you will see me fighting MMA.” 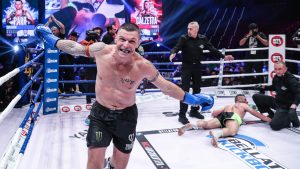 John Wayne Parr Quote: “He was tough, he came to fight. He wanted to mix and trade but I was more than happy to do that with the hands. I thought I was a little bit sharper, but he had a crack – he had a good go and hopefully it was entertaining for the crowd,” John Wayne Parr said. “Before this fight I really wanted to do something impressive and get an impressive finish so to score a head kick knockout is like a slam dunk. I feel like Michael Jordan right now. I’ve been watching Bellator and I just want to be a star here and hopefully tonight is gonna put that notch in my belt and help me fulfill that dream.”

Mustapha Haida Quote: I’m very happy for with the victory. I think I broke my hand or my wrist in the second round so I wasn’t sure if I’d be able to finish the fight, but I dug down deep and was able to get through the match,” Haida said. “Fighting for Bellator Kickboxing here in Italy has been a great experience for me and I hope to continue to fight here.”

Gaston Bolanos Quote: “I came into someone’s home town tonight, and the guy had a lot more experience in kickboxing than I do, so I’m quite happy with the win. It’s a different rhythm out there. I’m used to Muay-Thai, which I’ve been practicing my whole life. I’ve done a few fights without elbows even though it’s still Muay-Thai so it’s a bit different from what I just did tonight. I just came from an MMA fight so I had to switch up my whole camp but this is what I want to do and this is the opportunity that Bellator has provided for me, so I’m going to take it and stay as busy as possible,” Bolanos said. “I want to thank Bellator, Scott Coker, my coach Kirian Fitzgibbons and my team at CSA Gym for helping me and giving me all the opportunities that I’ve been given in my career. I’m hoping to get another MMA fight in here soon and develop a rhythm there. I want to become the biggest star in both sports and I know that I’ve got the opportunity and the talent to do just that.”