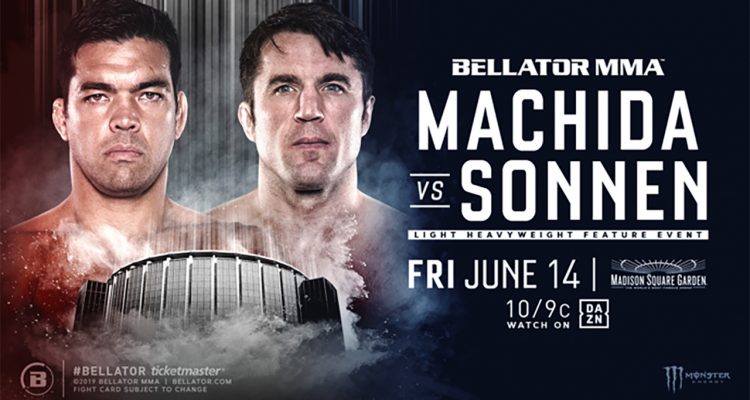 LOS ANGELES – Bellator 222 is returning to the “Big Apple” on Friday, June 14, 2019 for its second event at Madison Square Garden with a stacked card to be streamed exclusively on DAZN.

MSG, “The World’s Most Famous Arena” and Mecca of combat sports, will host Bellator’s return to Manhattan on June 14 with huge matchups. The blockbuster event features two of the sport’s most recognizable names in Lyoto Machida (25-8) and Chael Sonnen (31-16-1), who will finally meet after years of parallel MMA careers. Both fighters were in New York this week to speak about the upcoming matchup.

The card will also see Renzo Gracie Academy NYC standout Neiman Gracie (9-0) meet the winner of Rory MacDonald and Jon Fitch in a semifinal matchup of Bellator’s Welterweight World Grand Prix. Since MacDonald will enter his bout against Fitch on April 27 in San Jose as champion, the victor at Bellator 220 will then carry the belt into their matchup against Gracie on June 14.

Additionally, the Viacom-owned promotion is moving the previously announced 175-pound catchweight contest between grappling ace Dillon Danis (1-0) and Max Humphrey (3-2) from Chicago’s May event to June 14 inside Madison Square Garden. Fresh off two boxing wins in 2018 to remain undefeated at 22-0, Heather Hardy (2-1) is ready to return to the site of her mixed martial arts debut, when she brings her exciting style back to the Bellator cage against a soon to be announced opponent. Additional contests will be announced in coming weeks.

Bellator 222 will stream live exclusively on DAZN, the fastest-growing sports streaming service in the world, at 10 p.m. ET/7 p.m. PT, while preliminary action will stream on Bellator.com and globally on the Bellator Mobile App.

After signing with Bellator last year, Machida successfully made his highly anticipated promotional debut on one of the biggest cards of the year. The former UFC light heavyweight champ, known as “The Dragon,” bested Rafael Carvalho at Bellator’s event in Hawaii. The two-division threat, who spends time training in both his native Brazil and Los Angeles, owns notable career wins over Tito Ortiz, “Shogun” Rua, Dan Henderson, Rashad Evans and Randy Couture, and is looking to parlay his recent success at middleweight into a win over Sonnen at 205-pounds.

Hailing from West Linn, Ore., Sonnen is fresh off his semi-final run in Bellator’s Heavyweight World Grand Prix which finished earlier this year. With other notable wins over the likes of Wanderlei Silva, “Rampage” Jackson, Michael Bisping and “Shogun” Rua already under his belt, Sonnen now hopes to add the legendary Machida to his brilliant resume of renowned victories. After jumping up in weight class to compete in the biggest tournament in the promotion’s history, the former University of Oregon wrestler doesn’t seem to have lost a step and now moves down a weight to meet “The Dragon” on June 14.

Neiman Gracie has laced up the Bellator gloves seven times in his nine-fight professional career, but no victory has been as impressive as his most recent win against Ed Ruth in the opening round of the Bellator Welterweight World Grand Prix. With the submission win over Ruth, the Gracie Jiu-Jitsu black belt has now submitted opponents in five straight contests, including a submission win over Dave Marfone that took place during Bellator’s inaugural event at MSG, Bellator NYC. Now, with championship gold on the line, Gracie look to keep his streak alive when he meets the winner of Rory MacDonald and Jon Fitch.

Few 1-0 fighters invoke the sort of reaction that Dillon Danis does, so both haters and fans of the 25-year-old jiu-jitsu ace will have a chance to make their opinions heard when he returns to the Bellator cage for his sophomore appearance on June 14. Danis will now attempt to build upon his impressive toehold submission win during his promotional debut over Kyle Walker at Bellator 198 in Chicago. Looking to derail Danis’ hype will be Max Humphrey, a 30-year-old who calls Missouri home. Prior to his last outing in July, Humphrey finished three of his first four opponents in the opening round, competing on the regional MMA circuit.

Making her fourth appearance under the Bellator banner, Hardy hopes to duplicate the game plan that earned her an impressive knockout win over Alice Yauger in her professional debut inside the same venue that will host her bout on June 14, Madison Square Garden. Hailing from Brooklyn, N.Y., Hardy has built an imposing boxing resume prior to joining forces with Bellator, where she’s collected a pair of titles in multiple weight classes; the WBC International Female Super Bantamweight belt and the WBC International Female Featherweight belt. “The Heat” has protected an unblemished mark of 22-0 through a six-year stint inside the boxing ring.

No Comments on "Bellator 222: Machida vs Sonnen Takes Place Inside MSG on 6/14"