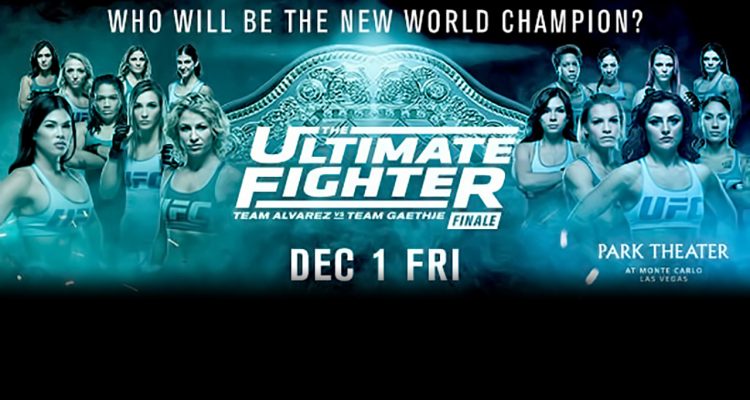 Las Vegas — Women’s MMA in the UFC® extends to new boundaries when one talented athlete is crowned the inaugural UFC women’s flyweight champion at THE ULTIMATE FIGHTER®: A NEW WORLD CHAMPION FINALE, Friday, Dec. 1 at Park Theater in Las Vegas. One of the 16 women competing on the current season of The Ultimate Fighter® will make UFC history as the first champion in a new 125-pound weight division.

Some of the world’s most exceptional female fighters from a variety of different backgrounds converged to compete on The Ultimate Fighter this season, including two UFC vets, Roxanne Modafferi and Lauren Murphy, former Invicta FC flyweight champion Barb Honchak and seven-time world jiu-jitsu champion Sijara Eubanks. The experience levels ranged from 2-1 Shana Dobson to Modafferi’s 34 professional bouts. Women came from across the globe, bringing different life experiences that range from Hungary’s Melinda Fabian to Nicco Montano, who was born and raised on an Indian reservation in Arizona, but all with the same goal of leaving Las Vegas with gold strapped around their waist.

The winner of this season will join an elite group of current and former UFC champions, including Forrest Griffin, Rashad Evans, Matt Serra, Michael Bisping, TJ Dillashaw, Carla Esparza and Robert Whittaker who have competed on The Ultimate Fighter and have gone on to win a world title in the Octagon®.

Visit the UFC® Press Portal for information and content to support your UFC coverage.

Tickets for THE ULTIMATE FIGHTER®: A NEW WORLD CHAMPION FINALE go on sale Friday, Oct. 20 at 10 a.m. PT and are priced at $150, $100, $75 and $50 (prices do not include applicable service charges and handling fees). Ticket sales are limited to eight (8) per person. To charge by phone with a major credit card, call Ticketmaster at (800) 745-3000. Tickets are also available at the Park Theater Box Office.

UFC Fight Club® members will have the opportunity to purchase tickets Wednesday, Oct. 18 at 10 a.m. PT via the website www.ufcfightclub.com. A special Internet ticket pre-sale will be available to UFC newsletter subscribers Thursday, Oct. 19 starting at 10 a.m. PT. To access this presale, users must register for the UFC newsletter through UFC.com.

About UFC®
UFC® is a premium global sports brand and the largest Pay-Per-View event provider in the world. Acquired in 2016 by global sports, entertainment and fashion leader, Endeavor, together with strategic partners Silver Lake Partners and KKR, UFC is headquartered in Las Vegas with a network of employees around the world. UFC produces more than 40 live events annually that consistently sell out some of the most prestigious arenas around the globe, while programming is broadcast in over 163 countries and territories to more than 1.1 billion TV households worldwide in 35 different languages. UFC FIGHT PASS®, a digital subscription service, delivers exclusive live events, thousands of fights on-demand and original content to fans around the world. For more information, visit UFC.com and follow UFC at Facebook.com/UFC, Twitter, Snapchat and Instagram: @UFC.

No Comments on "UFC Crowning Its First Women’s Flyweight Champion"