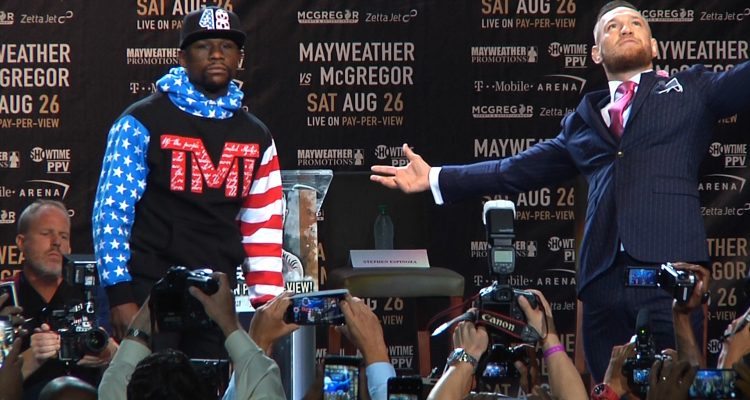 DENVER – The unprecedented showdown between legendary boxing champion Floyd “Money” Mayweather and UFC® superstar “The Notorious” Conor McGregor will be broadcast live to U.S cinemas on Saturday, August 26. “MAYWEATHER vs. MCGREGOR” will feature a 12-round super welterweight contest that marks the first time champions from both boxing and MMA will meet in a sanctioned boxing match.

Fathom Events and Mayweather Promotions partner to give fans nationwide the opportunity to view undercard bouts and the unprecedented main event in movie theaters nationwide on Saturday, August 26, 2017 at 6:00 p.m. PT/ 7:00 p.m. MT/ 8:00 p.m. CT/ 9:00 p.m. ET. The fight will originate from T-Mobile Arena in Las Vegas and the event will be produced and distributed by SHOWTIME PPV.

“The buzz that my fight against Conor McGregor is getting has been great already, so what better way to watch this larger than life event than on the big screen?” said Mayweather. “We brought boxing back to movie theaters eight years ago and it was a huge success, but this event is on a different level and I’m so glad we are giving fans another way to see all the action. Grab your popcorn because this is a fight no one will want to miss.”

“I’m going to knock him out inside of four rounds,” McGregor said. “Mark my words…I don’t care about a ring or an octagon. Put me in there and I’m going to kick ass.”

Tickets for “MAYWEATHER vs. MCGREGOR” can be purchased online by visiting www.FathomEvents.com, or at participating theater box offices. A complete list of theater locations is available on the Fathom Events website (theaters and participants are subject to change).

“Mayweather Promotions is very proud of its longstanding ​partnership with Fathom Events and we’re glad to be able to once again bring a Floyd Mayweather fight​ to movie theaters nationwide,” said Leonard Ellerbe, CEO of Mayweather Promotions. “If you can’t make it to T-Mobile Arena, but want to feel like you’re sitting ringside, watching this mega-event on the big screen​ will be an experience fans won’t want to miss.”

“We are excited to once again partner with Mayweather Promotions and all promotional partners to be part of what is shaping up to be the most anticipated match up in years,” Fathom Events VP of Programming Kymberli Frueh said. “Since our first bout broadcast to cinemas, fans of boxing and MMA have come together and enjoyed a larger-than-life ring-side experience on the biggest screens around. This will certainly be one for the history books for fans and all involved.”

Episode 1 of "What Had Happened Was..." with UFC anchor Karyn Bryant + UFC Strawweight...More

No Comments on "Mayweather vs McGregor To Be Presented Live In US Cinemas Saturday, August 26"